On international Star Wars Day (May the 4th), what better way to celebrate than a shout out to the velvet belly lanternshark: a shark with lightsabers on its back. Yes, that’s right, you read that correctly. This shark is armed with not one, but two lightsabers.

This small species of lantern shark typically  lives between between 200 m – 500 m in the waters off the coast of Europe, Africa (and probably the oceans of Alderaan) and reaches a maximum size of 45cm. While lots of deep-sea sharks have fin spines on their back for protection from predators, the velvet belly lanternshark goes one better by making them glow in the dark!!

Photophores (cells capable of producing light) on the edge of the dorsal fins shine through transparent fin spines turning their fin spines into lightsabers. In doing so, this shark announces its weaponry to would be attackers, letting them know they’re about to dance with a Jedi Master. Not only is it packing two lightsabers on each of its dorsal fins, it is also equipped with the ability to become invisible….(from below anyway).

Photophores cover the underside of the shark and produce light to match the down welling sunlight (above image). In doing so, this shark obliterates its silhouette from any potential attackers looking for a quick meal from below; a process called counter illumination. 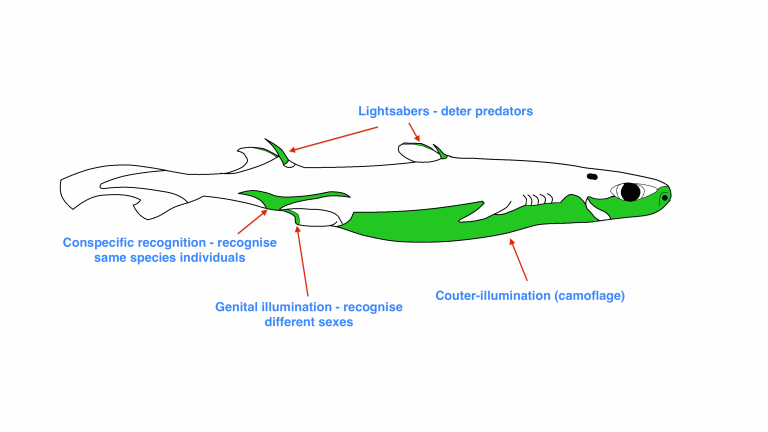 It’s not all battle though. To help this shark reproduce in the dark, their genitals also light up, helping males and females tell each other apart.

Lightsabers up top, invisibility from below, disco in the back – this Jedi shark would be a fierce match for any stormtropper, Colo Claw Fish or irritating Gungan!

May the 4th be with you! 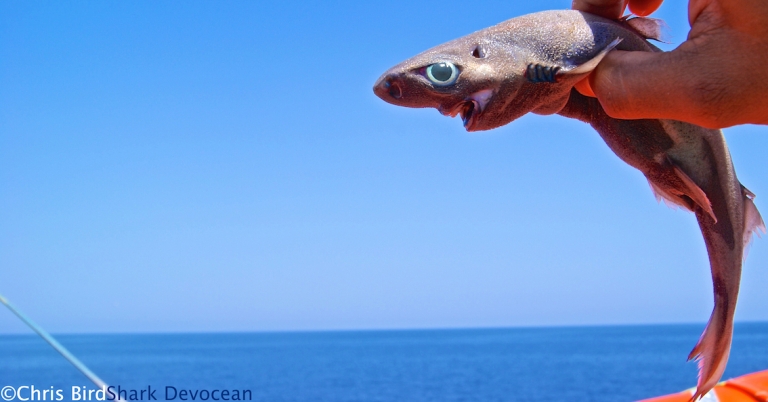 For more information on glow in the dark sharks, read my other blog post here.

The original paper that first described the lightsabers can be found here: Claes et al 2013: A deepwater fish with ‘lightsabers’ – dorsal spine-associated luminescence in a counterilluminating lanternshark