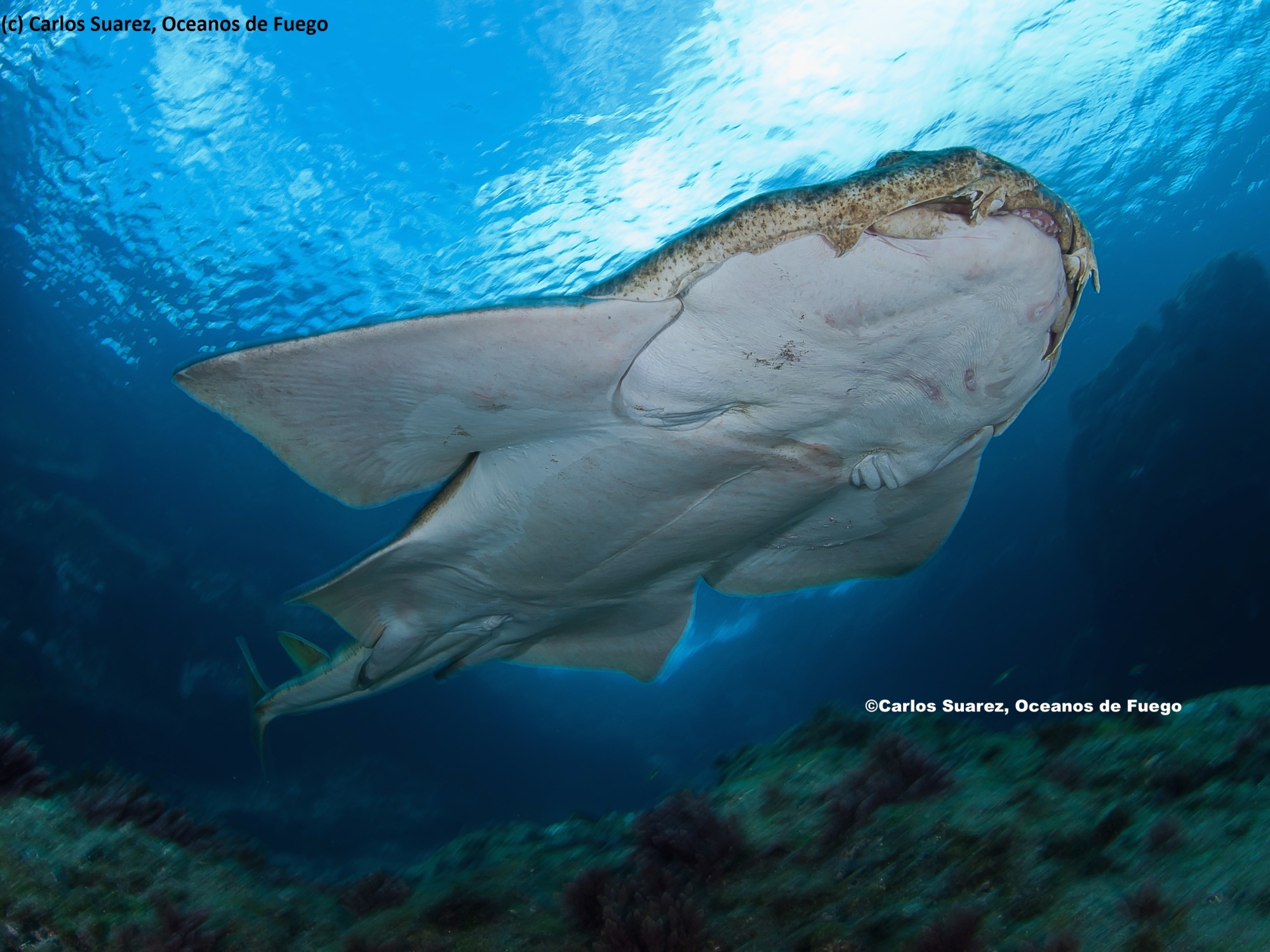 The great diversity of sharks in our oceans always amazes me. From bus sized whale sharks patrolling the open ocean, to the smallest pen sized dwarf lantern sharks of the deep-sea. If you thought all sharks were grey-white man-eating killing machines, you couldn’t be further from the truth. Let me introduce you to a shark you might not even think is a shark: the fascinatingly weird angel shark…but look quick, as this shark might not be around for much longer.

The angel shark (Squatina squatina) does not conform to any of your previous shark stereotypes. Looking like the love child between a shark and a skate, this shark belongs to a group of sharks called the Squatiniformes (due to their “squat” appearance). With a broad flattened body and wing like pectoral/anal fins, it is no surprise how this peculiar shark got its angelic name. It has two sensory barbels (that look almost like a moustache) at the front of their head, which they use to detect prey. Reaching up to 5ft in length, this shark gives birth to live young and is a notable predator in coastal waters from a young age. Whilst intriguingly bizarre in appearance, it is their rather unique way of devouring prey that steals the show.

With its flattened mottled brown body perfectly camouflaged against the benthos, the angel shark is able to bury itself into the soft sediment of the sea floor. With nothing more than its eyes exposed, here the shark waits, like a sniper in the undergrowth. It lies here motionless for up to weeks at a time, waiting. Waiting for an unsuspecting fish, ray or even shark to stray within striking range. Then, with an explosion reminiscent of a grenade, its jaws hurtle upwards out of hiding, engulfing the fish in one fell swoop. Check out the incredible video below to see this remarkable ambush attack on a horn shark.

Now I have ignited your intrigue for this glorious shark, how would you like to find out that this shark is literally on the verge of extinction. Once abundant  in European waters the angel shark has virtually disappeared from existence due to historic heavy fishing. They are now the second most endangered group of sharks in the world (second to the sawfishes). Due to a slow growth, late age of maturity and production of very few offspring, the angel shark is exceptionally vulnerable to fishing pressure. Although now classified  as “Critically Endangered” by the International Union for Conservation of Nature (IUCN) Red List in 2006, this shark is far from safe from disappearing completely.

Despite European protection this shark is still caught as by-catch (accidentally caught when fishing for other fish) in bottom trawling operations. Bottom trawling is the dragging of large, heavy nets across the sea floor in order to scoop up a variety of commercially important fish. Although it is illegal to retain this shark now, the trauma of such fishing usually results in high death rates. Unfortunately, angel sharks have not bounced back, and populations are still locally extinct or very rare in much of its previous range. There is a safe haven however, in a chain of islands off the coast of Morocco.

The Canary Islands remain one of the last safe holds for angel shark populations in the whole of Europe and is one of the best places in the world to dive with them. Not only are there good numbers here, there are also signs that these waters could be a nursery ground for juveniles as well. You would think these sharks would be cherished here; looked after, ensuring the proliferation of the species. Wrong. Due to increasing recreational fishing activity, lack of local knowledge and disregard of European protection policies, these sharks are still under continued threat. Could we be witnessing the first extinction of a shark species in modern history?

Zoological Society of London (ZSL) hope to change that with a new and exciting project. In conjunction with Universidad de Las Palmas de Gran Canaria (ULPGC) and Zoological Research Museum Alexander Koenig (ZFMK), ZSL hope to transform local behaviours towards this endangered shark. In order to embark on this potentially species saving project, ZSL need your vote. The project is in the running for two years of funding that could be fundamental in establishing programs that could help save this important benthic predator from extinction. Read more about the project here.

Voting literally takes seconds and could be a big step in helping save some of the last healthy angel sharks populations from extinction. Working closely with local dive centres and sports fisheries, the Angel Shark Project aims to change local behaviours that will directly benefit angel shark populations and secure their future in the waters of the Canary Islands.  Angel sharks need a guardian angel, and it could be in the form of you and ZSL.

3 thoughts on “Angel sharks in desperate need of guardian angels”